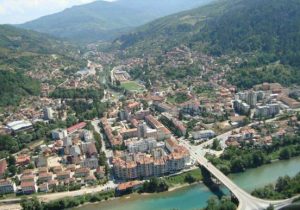 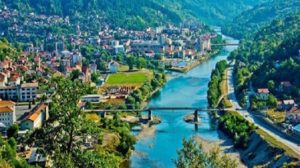 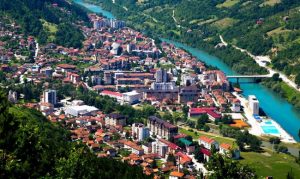 There is a long, rich and interesting chronicle of historical events related to Foča and its surroundings. Written documents say that this town with developed trade existed as early as 1368 and that through it was passing a trade road “Via Drine” connecting the Adriatic with the north of the country.

Today, Foca is a municipality with more than 26,000 inhabitants. The largest number of people live in the town, around 15 000. In the post-war period, Foca has been developed into a significant educational and health center. There is also the Secondary school of theology “St. Petar Dabrobosanski “, Secondary School Center, two town Primary schools, as well as the Clinical Center in Foca, which is a teaching base of the Faculty of Medicine and institutions providing high level of health care for the citizens of Upper Podrinje.

Foca is situated at an altitude of 400 m (canyon valley, river basin and fields) and 2,386 m (mountain bay and surfaces). Foca in all its characteristics, historical, geographical, ethnical, cultural, linguistic and etc. is situated in Herzegovina, because it extends to a much larger area of ​​Old Herzegovina.

There are a lot of cultural institutions in Foca, the Town Library, with over 70 000 books, the Culture and Information Center, the Museum, the Archive, the City Theater, and various cultural societies and associations, which are still active. Radio Foca operates as the only information newsletter in the municipality.

In the economic development of the municipality of Foca, the biggest opportunities are in tourism and hydro-potential. In the area of Foca municipality sport is represented by the work of several sports clubs, which bring together a lot of young people.

In the municipality of Foca, there are the highest peak of the Republic of Srpska, Bosnia and Herzegovina (Mountain Maglic 2,386 meters), whose parts belong to the highest mountain area in the Republic of Srpska, Bosnia and Herzegovina, of which several peaks exceed 2,000 meters above sea level; the only rainforest in the Republic of Srpska, Bosnia and Herzegovina, and the largest in Europe – Perucica, which is located within the Sutjeska National Park, where in the still untouched nature reserve there are the largest European specimens of fir (63 m) and spruce (65 m) and capital examples of beech , as well as certainly the most beautiful waterfall in B&H Skakavac; Perucica is bordered on the southeast by the unique canyon of the Tara River, deepest in Europe and the second in the world, right behind the Grand Canyon in the United States; a large number of natural mountain lakes and a large number of still unpolluted river flows, which has affected the fact that it has become a favourite gathering place for fans of rafting, hiking, hunting and fishing, and those who enjoy untouched natural beauty.

In this remaining island of primeval nature, there is an everyday world of flora and fauna, and therefore it is declared a strictly protected reserve.